Again, I was in no rush to get going in the morning, so by the time I had breakfast and packed for the day ashore, it was probably 9:30 am when I left the ship and caught the complimentary shuttle out of the port area. At breakfast in the Windjammer I could see that Alicante was much larger than I expected. The city spread out, with its famous castle sitting on a high hill above. 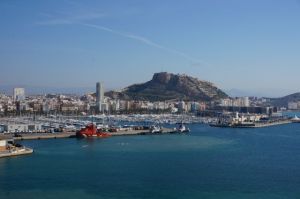 My plan had been to take a promised elevator to the top of the castle and then walk down. But due to a lack of preparation, I had no idea which way to turn in town and never found it. I did stroll along the beach a bit and then wandered into town.

Vendors were selling old LPs, comic books and “antiques” at a square a few blocks from the waterfront. I kept heading higher in the direction of the castle, and pretty much just stumbled on a narrow passageway covered with flags and banners fluttering in the wind. It was some kind of festival, and the entire neighborhood that clung to the side of the hill was decorated and full of strolling people.

I eventually ran into John (whom I had visited with at breakfast recently) and his wife. They confirmed that I hadn’t been anywhere near the elevator to the top of the castle, but said I could hike up the stairs and paths to the top if I was ambitious. I did make it better than a third of the way, but decided that was far enough. I had reached a nice lookout and snapped some good photos of the city and the Mariner at the pier.

So I wandered back down through the steep stairs and pathways of the small community, enjoying the crowds there for the festival, and then back through the city to the waterfront.

Alicante has a wonderful promenade that stretches for blocks, with wide sidewalks, tall palm trees and lots of restaurants with outdoor seating. By then, everyone was out of church and strolling the promenade in their Sunday clothes. The city was full of people enjoying the warm sunny afternoon. I hated to go back to the ship, but lunch awaited me and we would be sailing by mid afternoon. I had considered having paella ashore for lunch, but no restaurants would be ready to serve lunch for a couple of hours. So I headed back to download and sort photos while I ate in the Windjammer.

The evening fell into a familiar pattern – half-price drinks and trivia in the Schooner Bar, followed by dinner with Helen and Robin. We thought we might join Hoyt and Ron again, but they were celebrating a birthday with other friends and already eating. We joined Christie and John again and commiserated with Christie, who had broken her arm while ice-skating. Fortunately, the ship had an x-ray and the ability to set her arm, so with a little discomfort she was able to continue enjoying the cruise. The show cast presented its new production show for us – I was struck again by how much better Royal Caribbean’s production shows are than Holland America. Each line had its own advantages.

One of the disadvantages of booking a B2B (back to back) cruise at the last minute was that I couldn’t get the same stateroom for both segments. So after dinner I pulled the suitcases out from under the bed and packed. I didn’t need to pack the hanging clothes, but everything else when into the bags. My cabin steward would move them to my new cabin – down the hallway a bit – sometime during the next morning.

I’m a writer in love with the sea, sailing, travel and sketching.